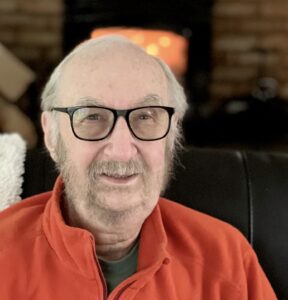 In this episode of the Getting Under the Surface (GUTS) podcast, we’ll be diving into part two of our conversation about trauma with Mark Brady, Ph.D.

Mark is a transpersonal neurobiologist, neuroscience educator, and recent throat cancer survivor. He’s also the prize-winning author of a number of books, magazine articles and academic papers and has published The Flowering Brain blog regularly for 14 years.

In part one of the series, we talked about trauma and disease, how to heal from trauma and how to heal emotional trauma — so be sure to check it out if you haven’t given it a listen yet.

Some of these trauma topics are also discussed in this episode, along with:

Listen to the full episode HERE.

EXCERPT FROM THE EPISODE …
“So I think I mentioned earlier that for 25 years, I volunteered as a grief counselor. And we initiated the second program in the country for grieving children. And one of the things we discovered was, the kids would come in with their parents once a week. The parents would go to their own group, and the kids would be with us, and they would come in sit in a circle.

For the first five minutes, they say who the person was that died, and what they died of. And once we went around the circle and did that, and they didn’t have to, but it was safe enough that by and large mostly they all did it.

After that, we would put them into activities that were primarily focused on the right brain, like our sand tray, painting — all right brain activities. And we had this room called the Steam Room, which is a room that was carpeted on all the walls and the floor, and the kids would go in. There was a punching bag in there, and there were a ton of pillows in there. And each week, the kids would be dying to see who could be the first cohort of kids that could get to use that steam room — because that’s where they all wanted to go.

And they would get in there, and they would wrestle, and they would throw pillows, and they would punch the bag, and climb up on the bag and jump off it into the pile of pillows. And my belief, based on this experience, is that what they were doing is — in this initial 5-minute circle — where we asked them to say who died and what they died from … they were activating neural networks that were recalling that the death (and in a number of cases it was a traumatic death). And then they were going into this program in the steam room … metabolizing the stress hormones associated with that loss by physically moving.”